The New Jewish Theatre is pleased to announce its 2023 season, which is also its 25th season of producing professional plays and musicals at the J. The season celebrates some of the New Jewish Theatre’s most beloved playwrights, productions and actors, while also bringing new works to St. Louis audiences.

The season will kick off on January 19, 2023, with Neil Simon’s Broadway Bound. The third play in Simon’s “Brighton Beach Trilogy” picks up with the Jerome family nine years after the events of Brighton Beach Memoirs, which New Jewish Theatre produced to great acclaim in 2019.

Next, is the heart-wrenching and hilarious one-person play Every Brilliant Thing by Duncan Macmillan with Jonny Donahoe. It will feature NJT favorite Will Bonfiglio and is an immersive, interactive and imaginative journey following one man as he works to cheer his depressed mother by listing every brilliant thing in existence.

In June, NJT will present the regional premiere of Gloria: A Life by Emily Mann. This is both a play and a conversation. The first act takes you on a journey through feminist icon Gloria Steinem’s life, and the second invites audiences to share their own stories.

Following Gloria, the season will feature a classic story of culture clashes and kindness by showcasing Mark Harelik’s The Immigrant, which will be the first play to be directed by NJT’s new Artistic Director Rebekah Scallet. The play tells the story of a Russian Jewish immigrant who struggles to create a new home for himself in a tiny Texas town in the 1900s while forging unlikely but lifelong friendships with its residents.

The season will conclude in December 2023 with the musical comedy, Little Shop of Horrors, about an unsuspecting young plant store clerk who accidentally unleashes a man-eating monster. Written by the dynamite duo of Howard Ashman and Alan Menken (the team behind the Disney classics Beauty and the Beast and The Little Mermaid), Little Shop of Horrors is full of toe-tapping musical numbers and fun.

“There is something for everyone to enjoy in New Jewish Theatre’s 2023 season,” says Scallet. “From the oh-so-familiar funny family squabbles of Broadway Bound to the stirring story of one of the most important women of our time, to a delightfully wicked musical theatre favorite. My thanks to my predecessor Eddie Coffield who largely assembled this season before his departure in August – I am thrilled with the productions he chose to celebrate Jewish authors and themes.”

The shows will premiere at The J’s Wool Studio Theatre (2 Millstone Campus Drive, St. Louis). Season subscriptions go on sale on November 1 and single tickets will be available for purchase on December 1. Tickets are available by phone 314-442-3283 or online at newjewishtheatre.org. Broadway Bound by Neil Simon
Directed by Alan Knoll
January 19 – February 5
Part three of Neil Simon’s acclaimed autobiographical trilogy finds Eugene and his older brother Stanley trying to break into the world of show business as professional comedy writers while coping with their parents break-up and eventual divorce. When their material is broadcast on the radio for the first time, the family is upset to hear a thinly-veiled portrait of themselves played for laughs. Every Brilliant Thing by Duncan MacMillian with Jonny Donahoe
Directed by Ellie Schwetye
March 16 – April 2
We have all been in a difficult place. We all long for happiness. This play compels us to fight our challenging time with the practice of gratitude. Make a list of all that is brilliant. All of it. This play celebrates the challenging times and the power we must have to survive them. A life-affirming play. Gloria: A Life by Emily Mann
Directed by Sharon Hunter
June 1- June 18
Decades after Gloria Steinem began raising her voice for equality and championing the voices of others, her vision is as urgent as ever. In this exploration of the iconic feminist’s legacy, the first act tells her story, and the second invites the audience to share their own. Gloria: A Life embodies Steinem’s philosophy that conversation is a catalyst for change as it celebrates one of the most inspiring women of our time. 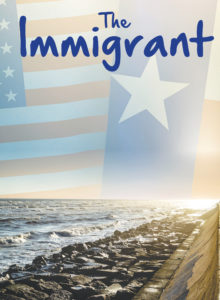 The Immigrant by Mark Harelik
Directed by Rebekah Scallet
October 12 – October 29
Rural Central Texas, 1909. A young Russian-Jewish immigrant, newly arrived in America through the port of Galveston, pulls his banana cart into the hamlet of Hamilton. Fleeing the vicious pogroms of his homeland, he has sought refuge in the land of the free. Able to speak only Yiddish, alone amid a staunchly Christian community, he begs for shelter. Taken in by a local couple, over the next 30 years, he makes a home and raises a family in this tiny town. A religion meets religion, culture meets culture, fear meets fear and love meets love. This is the true story of Haskell Harelik, “the Immigrant.” Little Shop of Horrors – Book and Lyrics by Howard Ashman, Music by Alan Menken
November 30-December 17
The meek floral assistant Seymour Krelborn stumbles across a new breed of plant he names “Audrey II,” after his coworker crush. This foul-mouthed, R&B-singing carnivore promises unending fame and fortune to the down and out Krelborn as long as he keeps feeding it… BLOOD. Over time, though, Seymour discovers Audrey II’s out-of-this-world origins and intent towards global domination!